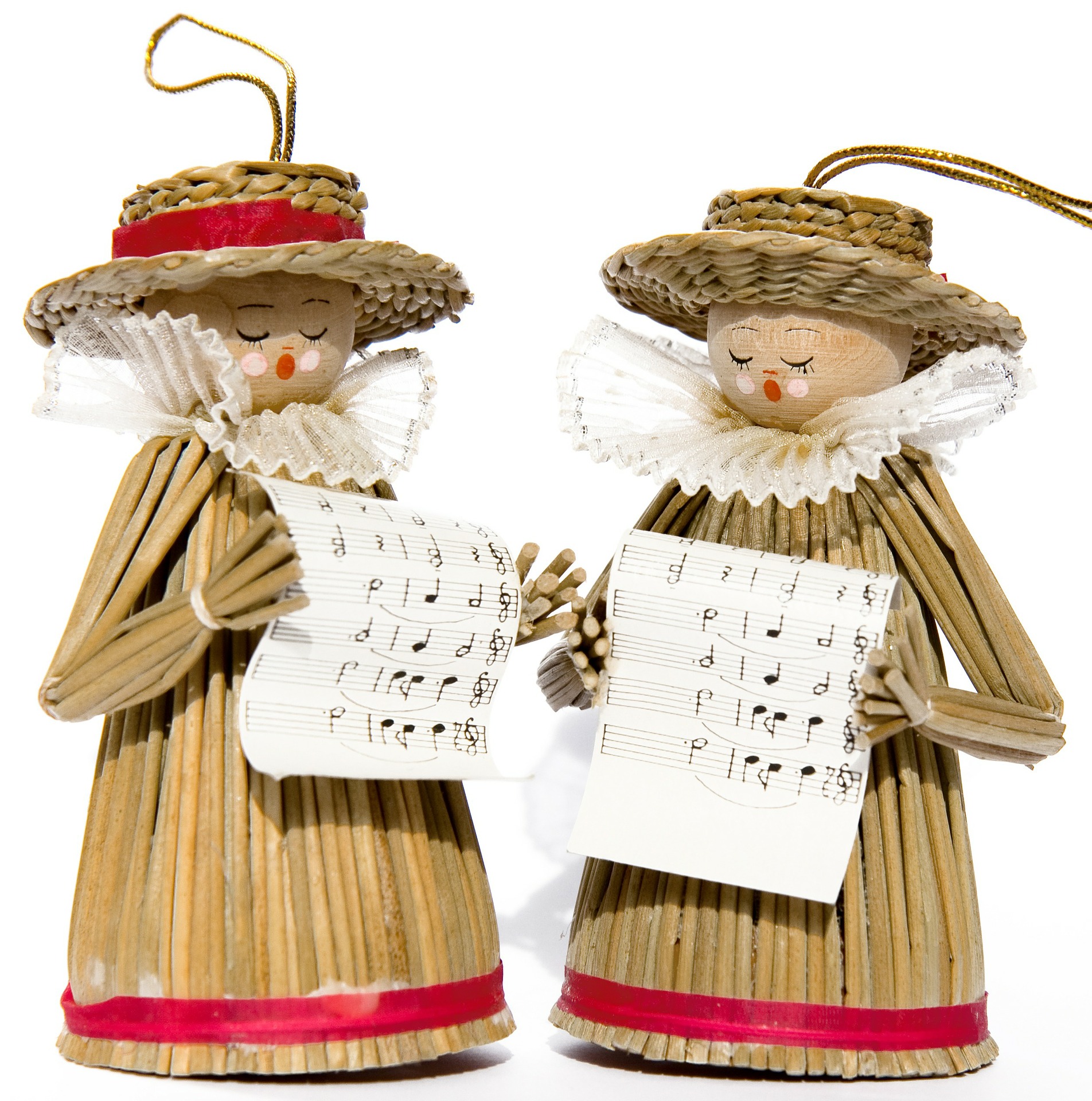 On this Christmas Eve, I wanted to share this beautiful poem which has been set to music several times. The version you are probably most familiar with is the arrangement sung by John Denver on The Muppets Christmas album. That version was recorded in 1979, and the composer, Lee Holdridge, took some liberties with the lyrics to modernize them and probably to fit his musical arrangement, although he did not force the lyrics to rhyme.

A previous composition was set to music in 1954 by Gerald Finzi, for his Christmas opera.

I found two other composers via a Google search, and I imagine there are others as well, but since I could not find their actual recordings or music notes, I assume then that the 1954 Gerald Finzi music and the 1979 Lee Holdridge music are the most popular.

The author is Robert Seymour Bridges, who lived from 1844 to 1930 in England. He worked a physician from 1867 to 1882. He began to publish poems and plays in 1873, and in 1913 was appointed poet laureate of England. Noel: Christmas Eve, 1913 is noted for being a non-rhyming poem with 12 beats per line. Although to be fair I am counting on my fingers and I count 11 beats in the 2nd line and 13 beats in the 3rd, but I am getting too technical. It doesn’t matter. The point is that Mr. Bridges was recognized not only for his beautiful use of English words, but also his skill at precisely controlling meter.

The poem was published in the London Times on 24 Dec 1913, “by his Majesty’s express desire,” and as Robert Bridges’ first official offering as England’s poet laureate. At the time, the poem was simply titled Christmas Eve.

As the protagonist is taking a Christmas Eve walk, it is night time and he is on a hill. He admires the starry sky and notes that from where he is standing, he can hear church bells from all over the valley below. Suddenly he recalls the Gospel of Luke and the Christmas Story, specifically the angels appearing to the shepherds, who were afraid. Or perhaps is recalling a previous poem by England’s poet laureate from 1692-1715, While Shepherds Watched Their Flocks By Night. The protagonist knows he is only hearing church bells, but he allows himself to think of them as either angels’ songs or “starry music”, an interesting and scientific choice of words from Dr. Bridges.

I am reprinting the actual image of the 1913 newspaper below, followed by plain text. 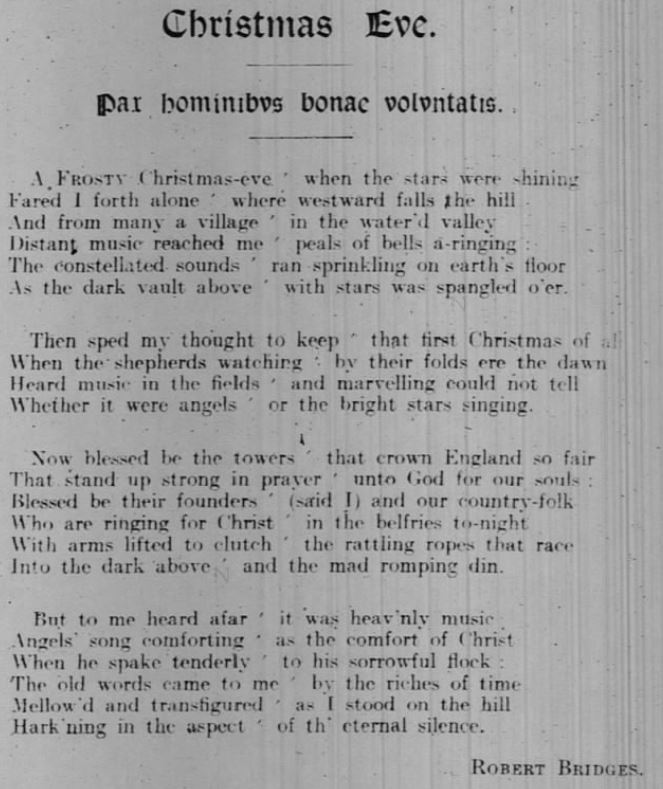 A frosty Christmas Eve, when the stars where shining

Fared I forth alone, where westward falls the hill,

And from many a village, in the water’d valley

As the dark vault above with stars was spangled o’er.

Then sped my thoughts to keep that first Christmas of all

When the shepherds watching by their folds ere the dawn

Heard music in the fields, and marveling could not tell

Whether it were angels or the bright stars singing.

Now blessed be the tow’rs that crown England so fair

That stand up strong in prayer unto God for our souls

Blessed be their founders (said I) and our country folk

Who are ringing for Christ in the belfries to-night

With arms lifted to clutch the rattling ropes that race

Into the dark above and the mad romping din.

But to me heard afar it was starry music

Angels’ song, comforting as the comfort of Christ

When he spake tenderly to his sorrowful flock:

The old words came to me by the riches of time

Mellow’d and transfigured as I stood on the hill

Heark’ning in the aspect of th’ eternal silence.

So now let us discuss the composers who set this poem to music. Both Finzi and Holbridge removed the 3rd stanza with the references to the love of England, most likely to make the lyrics more appreciated worldwide.

Gerald Finzi wrote his music in 1954, in a piece he called In Terra Pax, which combined Robert Bridges’ words with words from the Gospel of Luke.  Listen here for a stunning 7-minute version of this arrangement. Or watch here on YouTube for a 15-minute version that is a bit more dramatic, as Finzi intended.

The 1979 composition by Lee Holbridge is most familiar, since it was made famous by John Denver. This version is adapted for a more modern English. It does drive me slightly crazy that the lyrics have been transcribed incorrectly all over the Internet. It’s not “I traveled for the home”.  !!!!  It IS “I traveled forth alone.” Anyway, you know the Muppets version, so instead I am linking to a live concert version that John Denver recorded in 1996 with the London Symphony Orchestra. I’m starting it right when John is saying off the microphone, “Do you know who wrote this poem? … I don’t either … Doggone it! Details!” Listen here! I traveled forth alone!! This version is less than 3 minutes long.

So there you go. That’s what Christmas is all about. Enjoy today, the best day of the year! 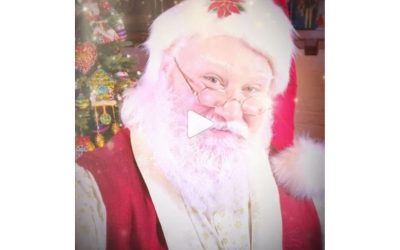 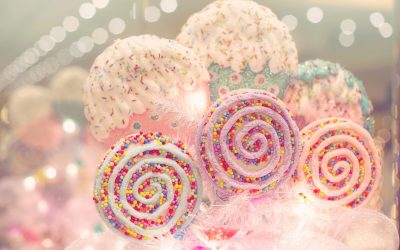 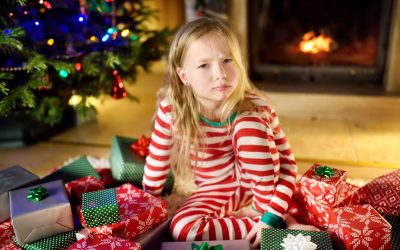 Consider setting some of your children’s gifts aside for later

Can a child have too many gifts? Consider saving a couple of the children’s gifts for your emergency gift closet, rather than putting every single thing under the tree. Here is a story of my own, to help illustrate. I have 2 young daughters, a year apart in age. When...